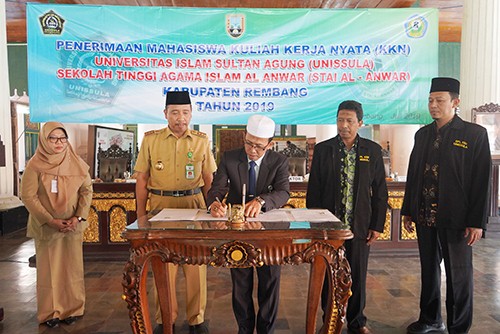 Unissula Rector, Ir. Prabowo Setiyawan, M.T., PhD., entrusted 240 of his students to the Rembang Regent, Abdul Hafidz, which was held in the Rembang District Office Hall (15/7).

In his remarks, Prabowo advised his students that carrying out community service was not only intended to share knowledge, but also aimed to seek knowledge and maintained the good name of the almamater. “Wherever you are, show that you are still Unissula. Do not change yourself. Continue to carry out what is our culture, namely Islamic academic culture (BUDAI). Do not be arrogant wherever you are,” he said.

Prabowo closed his remarks with a message that the students must show that Unissula is qualified which can be proven by responding all challenges with achievements.

Meanwhile, the Regent of Rembang welcomed openly the presence of Unissula students, he stated that he was very happy to cooperate with Unissula and appreciated Unissula’s steps in its active role in advancing his region. “I am pleased and proud that the submission of the KKN students was handed over directly by the Rector of Unissula so that it will encourage and motivate us so that the Rembang strategic plan runs well,” said the Regent.

“To be honest, Rembang Regency is one of the underdeveloped regions, one of which with the highest level of poverty. One of the strategies used to reduce poverty is to establish cooperation with universities through KKN programs,” he explained.

“We hope that with this KKN program, the existence of Unissula students will be able to educate, transmit their knowledge, direct, and innovate to the people of Rembang so that they are willing and able to create jobs by utilizing the natural potential around them,” he concluded.

KKN activities were carried out for 45 days consisting: 21 days for debriefing, site surveys, preparation of proposals and work programs, 17 days at KKN locations, and 1 week for activity reports.